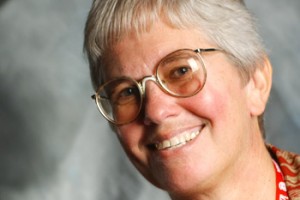 In the summer of 1998, Dr. Jennifer Mather, a biologist and psychologist at the University of Lethbridge, in southern Alberta, began travelling to the Netherland Antilles in the Caribbean to study whether or not a certain common species of warm-water squid is capable of language. As Saturday Night magazine has noted, Mather is the ‘Jane Goodall of Calamari’, and, if she is correct, “…an eight-inch mollusc, the Caribbean reef squid, will become only the third living group, after humans and honeybees, known to employ a symbolic, creative, visual vocabulary and grammar”.

She holds a B.Sc. from the University of British Columbia, an MA in Biology from Florida State and a Ph.D. in Psychology from Brandeis University. Since 1985, she has been a professor at the University of Lethbridge, and, again, as Saturday Night noted, thus “….becoming a marine biologist in a town that has not been under salt water since the Devonian periods”.

The visually arresting and often misunderstood octopus has long captured popular imagination. With...