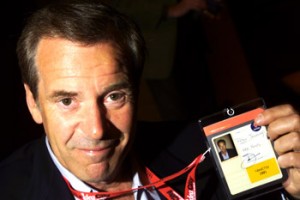 Peter Jennings was among the most trusted and influential figures in American television news. Born in 1938 in Toronto, Jennings became the youngest ever U.S. network news anchor when he became sole anchor and chief editor for ABC’s World News Tonight in 1983. He died of lung cancer in 2005, after 22 years as anchor at ABC.

Jennings reported on almost every major world event of the latter 20th century, and was known for his marathon-coverage of breaking news events such as the outbreak of the Gulf War in 1991, the Millenium celebrations and the attacks of September 11, 2001. He established the Middle East bureau for ABC news, the first U.S. television news in the Arab world.  At the peak of his popularity as anchor at ABC, he was watched by over 14 million viewers nightly, becoming one of the most familiar faces on American television.

Peter Jennings was honoured in his lifetime with numerous awards, including 16 Emmys, two George Foster Peabody awards, and a career award for excellence in journalism from Harvard University. He was inducted into the Order of Canada in 2005.