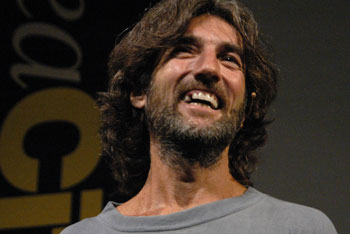 Ken Nateshvar Scott (Tesh) is recognized as a pioneer, leader and innovator in the field of yoga and dance.

Beginning as a young award-winning gymnast, and then as a performer in dance and theatre companies, Tesh is the founder of Canada’s first Dancersizer studio, during the dance-aerobics trend of the ‘80s. He is the creator of Danskinetics, which marries the flow of Kripalu yoga and dance.

He is also the creator of Contact Yoga (bringing yoga off the solitary mat and into the realm of relating) and Yogassage. Nateshvar (which translates into “The King of Dancers”, a name awarded to him by Yogi Amrit Desai at Kripalu Center), has been featured in such magazines as Vogue, W, and The New York Times. Self magazine named him one of the top ten yoga instructors in the United States.

He has served as a trainer and transformative guide to many, including top athletes, actors, executives and politicians throughout the world. Tesh’s clients have included Donna Karan, Demi Moore, Woody Harrelson and Hilary Clinton.

This speaker has no past talks.