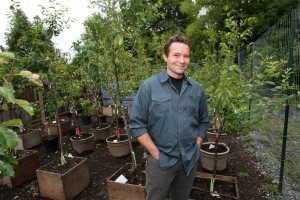 Sam Van Aken is an Art professor at Syracuse University. His family is Pennsylvania Dutch, and he grew up on the family farm.

In 2008, while looking for specimens to create a multi-coloured blossom tree as an art project,Van Aken acquired a 3-acre orchard of the New York State Agricultural Experiment Station, which was closing due to funding cuts.He began to graft buds from some of the over 250 heritage varieties grown there, some unique, onto a stock tree.Some five years later the resultant tree had branches from forty different “donor” trees, each with a different fruit, including almond, apricot, cherry and peach varieties.

Each spring the tree’s blossom is a mix of different shades of red, pink and white. As of 2014, Van Aken had produced 16 such trees, which were growing in a variety of locations, such as community gardens, museums and private collections, throughout the USA. Some of the locations include Newton, Massachusetts; Pound Ridge, New York; Short Hills, New Jersey; Bentonville, Arkansas; and San Jose, California. He has plans to populate a city orchard with his samples.

Imagine a tree that produces 40 different varieties of stone fruits...