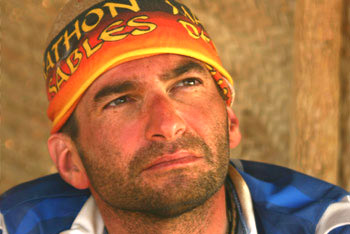 In 2006, Ray Zahab and two other runners crossed the Sahara Desert by foot in one hundred and eleven days. National Geographic tracked this epic expedition by web and Matt Damon narrated and produced a documentary film titled Running the Sahara.

Two years later, Ray and two other Canadians broke the world speed record to the South Pole. This expedition was completed as a part of impossible2Possible, a non-profit organization with a mission to inspire a generation to make the world a better place.

After witnessing and experiencing the water crisis and malaria epidemic in Africa, Ray decided to dedicate his future adventures to raising awareness and funds for various causes. He is on the Board of Directors for the Ryan’s Well Foundation, is the official Athletic Ambassador for the ONExONE organization and is a representative of SpreadTheNet. In 2007, he was the recipient of the ONExONE Difference Award.

Ray Zahab - Running Across The Sahara

Ray Zahab talks about running across the Sahara Desert in 111 days. (The equivalent of just over 2...