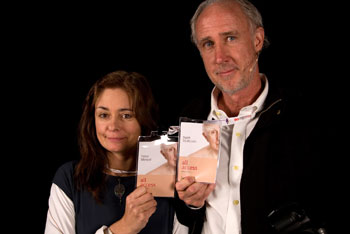 Peter Menzel is a photographer known for his coverage of international feature stories on science and the environment.

His award-winning photographs have been published in Life, National Geographic, Smithsonian, the New York Times Magazine, Time, Stern and GEO. He has received a number of World Press and Picture of the Year awards.

Faith D’Aluisio is a former television news producer whose work received awards from the Associated Press and the United Press International.

The editor and lead writer for the Material World book series, she received the James Beard Foundation Award in 1999 for Best Book, Reference and Writing on Food for Man Eating Bugs.

Menzel and D’Aluisio are the co-creators of the books Hungry Planet: What the World Eats, Material Worlds: A Global Family Portrait and Women in the Material World. They are also the co-authors of Man Eating Bugs: The Art and Science of Eating Insects and Robo Sapiens: Evolution of a New Species.