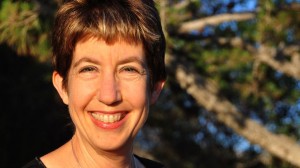 Marlene Zuk is a biologist and writer who recently moved from California to the Twin Cities, where she is a professor in the Department of Ecology, Evolution and Behavior at the University of Minnesota.  She studies sex and evolution in animals from insects to birds, and is interested in how people draw parallels between human and animal behavior.

Zuk’s research has taken her around the world, in particular to Hawaii and other parts of the Pacific.  Her books include Sexual Selections: What We Can and Can’t Learn About Sex from Animals; Riddled with Life: Friendly Worms, Ladybug Sex, and the Parasites that Make Us Who We Are; and Sex on Six Legs: Lessons on Life, Love, and Language from the Insect World.  She also writes for many popular outlets, including the Los Angeles Times, the New York Times, and Natural History magazine, and has been interviewed on radio shows ranging from The Splendid Table to Fresh Air.