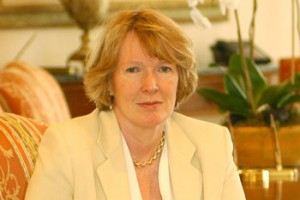 Margaret MacMillan is an author and historian and is also a Provost of Trinity College at the University of Toronto. Her most recent work, Paris 1919: Six Months That Changed the World (2002), called “fascinating and funny” by The London Sunday Times, is the first full-scale treatment of the Peace Conference in more than 25 years.

In it, she argues that the ‘peacemakers’ (the United States’ Woodrow Wilson, Britain’s David Lloyd George and France’s Georges Clemenceau) have been unfairly made as scapegoats for the mistakes of those who came later. The book has earned MacMillan several prestigious awards, including the PEN Hessell-Tiltman Prize, the Duff Cooper Prize and the BBC Four Samual Johnson Prize for non-fiction.

MacMillan received her PhD from Oxford University. Her previous books include Women of the Raj (1988) andCanada and NATO (1990).

he is the great granddaughter of Lloyd George, lives in Toronto and is responsible for 1,400 students (as Provost at Trinity).