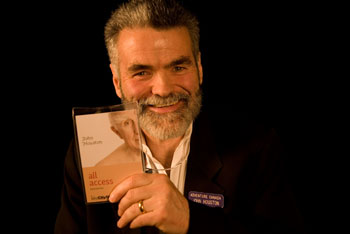 John Houston was born in 1954 and spent the first eight years of his life in the Canadian Arctic at Cape Dorset, on Baffin Island.

At the age of five, John began translating at the nursing station for Inuit visiting from hunting camps, and for journalists visiting from the outside world. He saw first-hand the gap that separates two great cultures, and the need for creativity to bridge that divide.

John established the Houston North Gallery in Lunenburg, and co-founded the acclaimed Lunenburg Folk Harbour Festival. In 1998, he directed and co-wrote Songs in Stone, an award-winning one-hour documentary about the collaboration between his parents and Cape Dorset. Songs in Stone launched an Arctic trilogy, followed up by Nuliajuk: Mother of the Sea Beasts and Diet of Souls. The films garnered national and foreign awards, plus nominations including Geminis and the coveted International Emmy. John is the founding President of Ajjiit Nunavut Media Assoc., and also serves on the National Directors Division board of the Directors Guild of Canada. In 2008, the Houston family will be celebrating 60 years of continuous artistic collaboration with the Inuit.

Inuit Art and film pioneer John Houston speaks to the audience about his inuit culture and how his...