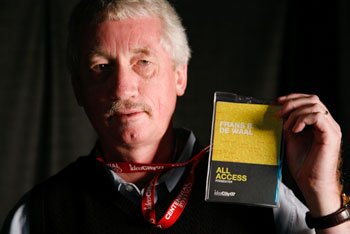 Dr. Frans B. M. de Waal is a zoologist and primatologist known for his work on the social intelligence of monkeys and apes.

His first book, Chimpanzee Politics (1982), compared the schmoozing and scheming of chimpanzees engaged in power struggles with that of human politicians. Ever since, de Waal has drawn parallels between primate and human behaviour, from peacemaking and morality to culture.

De Waal has edited or co-edited nine scientific volumes. His six most popular books have been translated into more than a dozen languages and have made him one of the world’s best-known primatologists.