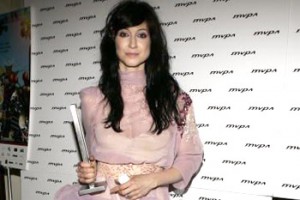 David Bowie, Marilyn Manson, Barry Adamson, Tricky, Robert Plant, Jimmy Page and Sheryl Crow are among the musical stars who have flocked to music video director Floria Sigismondi for what Shift called her “dark, innovative perspective that recalls the paintings of Francis Bacon.” The sometimes disturbing images that emerge from her self-described “scandalous” subconscious led the cast of Saturday Night Live to once joke, “Satan called, he said that your videos were giving him nightmares.”

Born to opera singer parents and named after a character in the opera Tosca, Ms. Sigismondi seems destined for dramatic success. Photography was her first medium; she studied at the Ontario College of Art in Toronto and established a successful career as a fashion photographer. She has rapidly achieved renown through her directing, and is also in demand as a surreal photographer. She has signed a development deal for a feature film that is based on a true story, and is in the middle of promotion for the release of her first book, Redemption.