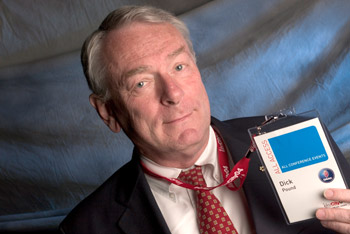 During the 2000 Summer Games in Sydney, he was acting president and just missed being elected the eighth president of the IOC after Juan Antonio Samaranch stepped down in 2001.

Pound was the founding chair of the World Anti-Doping Agency, Chair of the Coordination Commission for the 1996 Olympic Games, and a director of the Organizing Committee for the 1998 Olympic Winter Games in Calgary, Alberta.

It was partly because of Pound’s investigation of the recent Salt Lake City bribery scandal that new regulations and an ethics watchdog to oversee interaction between IOC members and bidding cities was created.

Born in Canada in 1942, Pound began his athletic career as a competitive swimmer and won four medals – a gold, a bronze, and two silvers – at the 1962 Commonwealth Games in Australia.

Educated in Montreal, he received degrees in commerce and law from McGill. He is a partner in the law firm Stikeman Elliott and was the 17th chancellor of McGill University.

Dick Pound, Founding Chair, World Anti-Doping Agency, talks about one of his volunteer jobs as a member...