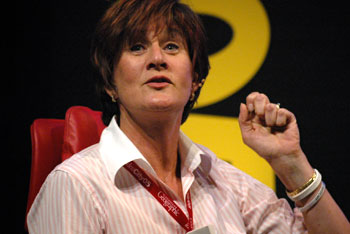 Denise Donlon first came into Canadians’ living rooms in 1985 as a Host/Producer at MuchMusic, where she brought audiences a wide range of reports and profiles on the international music scene, while offering a unique perspective on pop culture and social issues.

In 1992, Donlon made national headlines when she was appointed MuchMusic/CityTV Director of Music Programming. Acquiring the role of Vice President and General Manager in 1997, Donlon took MuchMusic to an international audience, followed by the launch of MuchMoreMusic. She received the 1997 Outstanding Achievementt Award from Women in Film and Television Toronto, and has been awarded Broadcasting Executive Award three times by the Canadian Music Week Industry.

In 1998, Donlon was named one of the 25 Most Important People in New Music by Shift Magazine. She has won two Gemini Awards, the Peter Gzowski Literacy Award of Merit, and has been the subject of an hour-long profile in the CBC’s prestigious Life and Times series.

In 2000, Donlon was named President of Sony Music Canada, overseeing the production, manufacturing, marketing and distribution of internationally loved musicians, such as Celine Dion, Our Lady Peace and Bruce Springsteen. In 2001, she was honoured with the Canadian Women in Communications Woman of the Year Award, and was inducted into the Broadcast Hall of Fame by the Canadian Association of Broadcasters in 2002.