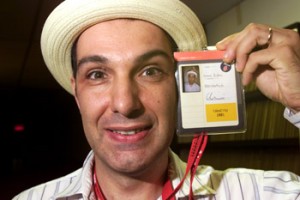 Dave Bidini is rhythm guitarist for the legendary Canadian rock band the Rheostatics. He is also a writer who plays, lives and breathes hockey. While watching the 1998 Stanley Cup final, Bidini wondered if our North American fascination for hockey existed in other parts of the world – without the complications of professional sport.

His quest took him to a rink in a Hong Kong mall and to the desert of the United Arab Emirates. He detailed his findings in his book Tropic of Hockey: My Search for the Game in Unlikely Places. His earlier book, On a Cold Road: Tales of Adventure in Canadian Rock, tells the story of the Rheostatic’s own cross-country tour, interspersed with tales of fetid hotel rooms and the mood swings of fellow band members.

When he’s not writing or watching the game, Bidini’s sports commentary can be heard in the CBC radio program “Definitely Not the Opera.” He lives in Toronto.

Dave Bidini - A Comical Look At Violence In Hockey

Canadian musician, Dave Bidini, wants to talk a little bit about violence in hockey. He reads an excerpt...