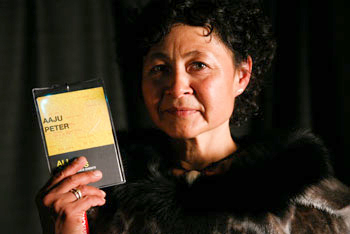 Aaju, a mother of five, is an Inuit culturalist, designer of traditional clothing, musical performer, translator/interpreter, law student and soccer player and is very active in social and cultural issues in Nunavut.

A native of west Greenland, Aaju moved to Iqaluit, Nunavut in 1981 and along with learning the Inuit language Inuktitut and English, learned the Inuit way of working with sealskin. She produces slippers, ties, bags, vests and jackets. Aaju is renowned for her design of former Governor General Adrienne Clarkson’s sealskin coat.

Aaju and her son Aggu recently went to The Hague in the Netherlands to protest legislation banning sealskin and sealskin products. They also met with the Dutch parliament to address the issue of the consequences the ban would have on Inuit livelihood. She attends conferences all over the world to speak about issues related to Inuit culture and language. Aaju now holds a law degree in Iqaluit.