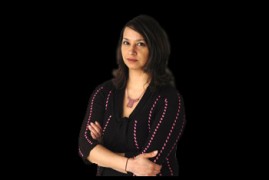 Whether it is stem cell research, DNA testing, medicinal marijuana, smallpox, bioterrorism or SARS, award-winning journalist Carolyn Abraham has covered all of the hottest medical issues in the news media today.

As the medical reporter for The Globe and Mail, she also first broke the story of how Albert Einstein’s brain had to come to Canada (a story that served as the basis for her 2001 book Possessing Genius: The Bizarre Odyssey of Einstein’s Brain – nominated for the 2002 Governor General’s Award for Literary Non-Fiction and the winner of the Canadian Science Writers Association National Book Award).

She has twice received national award from the Canadian Daily Newspapers Association for investigative journalism and is a winner of the Canadian Science Writers Association in Society Award for her reporting on the business of genetics. Carolyn Abraham began her career at the Ottawa Citizen and Southam News.

Edward Burtynsky’s photographs and films have served as witness to man’s destructive nature. But his…READ MORE »

Edward Burtynsky’s photographs and films have served as witness to man’s destructive nature. But his…READ MORE »

Daniel Vnukowski enjoys international recognition as a concert pianist, in a formidable career that has…READ MORE »

Violinist Lara St. John is a performing powerhouse. She picked up the violin at the…READ MORE »